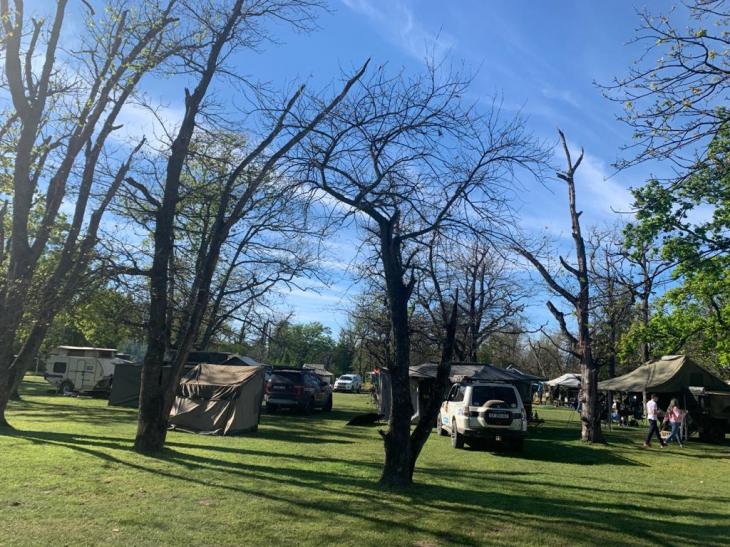 Today I would like to report back on our Womans Day Weekend Camp at Noukrans Boskamp, which is located just 20km from Heidelberg on the outskirts of the Grootvaderbosch Nature Reserve.

The campsite is an offgrid one, with no electricity on site, except at the ablution blocks for lighting of the gas powered showers etc.

Campers made their way to the campsite, with one lucky couple arriving on Thursday already, while the rest of us made our way up on Friday.

Campers arrived on camp and setup in a Laager format, making for a great layout and a communal kuier area for both kids and adults alike.

The campsite has no traditional layout and Campers can setup where they like, with most opting to setup under the shady oak trees.

The kids made great use of the open space in the middle of the Laager, thanks to the Volleyball net that was brought along by the Nelson Family, making for some entertaining matches between the kids, and some of the young at heart adults.

Saturday morning saw most of the campers head out to Barrydale to go and pay a visit to the new restaurant in the area called Karoo Daisy, specialising in Square Pizzas and great local arts and crafts.

The drive to and from Barrydale is a great one from the campsite, as you meander through the beautiful Tradouw Pass which was built in 1869 by Thomas Bain.

The kids arrived back at camp just in time for the Farmer to take us through his Dairy operation, showing us how they Milk the over 200 Jersey Cows they have on site, even allowing the campers to taste some warm fresh milk, which had just been milked from the cows.

A highlight was a visit to the Calf pen, where we got to see them feeding the newborn calves, with the youngest one only being a day old.

That evening we settled around the communal campfire, hoping to listen to the Rugby on the “Draadloos” only to be disappointed that it wasn’t being broadcast and with no cellular service, we were unable to stream the match.

A big Thank you to Amelia for driving into Reception Range to get the score for us. Well done to Claude and Daphney who were the closest to predicting the score and shared the Prize Pool for guessing the score.

Sunday morning saw a few late risers around the campsite, with some feeling the affects of a late nigh kuier around the campfire as we celebrated the Rugby victory with a karaoke singalong to “Hier Kom die Bokke”

The kids made great use of their “No Techno Time” by holding their own Camp Olympics, with the sound of Laughter echoing through the campsite.

Late Sunday evening the rain set in on camp and Campers were treated to a large downfall of water overnight. This made packing up a muddy experience on Monday morning, however the rain did let up for a few moments during packup, with members scrambling to make the most of these “dry patches”

Once again this was another amazing camp weekend and a big thank you must go out to all the members who attended and made this an awesome camp weekend, as well as the Farmer and his wife who went above and beyond to make this a special camp, including a daily delivery of the yummiest farm fresh bread, homemade butter and fresh milk.

See you around the Campfire at the next camp, if you haven’t booked already please get into contact with Gert as we are severly limited in spots and already have a waiting list in place for BaliesGat, which is another offgrid camp and only has 2 bathrooms and 2 showers, so please be prepared to make use of your own bathroom facilities if you have them ????